Merkel said that while wind energy seemed on track to becoming commercially viable in Germany, this did not seem the case for solar energy. Already over the past two years, Germany has sharply reduced so-called feed-in tariffs, through which investors receive a guaranteed return on generated energy output. 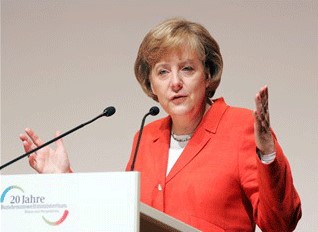 “But I am not sure whether we shouldn’t be tackling this even more,” Merkel told a regional conference of her Christian Democrat party in Magdeburg.

Europe is by far the world’s biggest market for solar power yet it largely depends on government subsidies because solar power is still up to eight times more expensive than conventional forms of power like coal and gas.

The sector has boomed since the start of the millennium as investors rushed to get a slice of the next big thing amid worries about climate change and new targets encouraging countries to curb carbon emissions.

But now cash-strapped euro zone governments, grappling with debt crises and fragile economic growth, are reducing their support in order to bring down production costs and make the industry more competitive.

Merkel said it was not rational for so many subsidies to go toward a sector which ultimately produced little energy.