Among 45 critical energy technologies and sectors assessed in a tracking report by the International Energy Agency, only seven are keeping hopes alive that climate, energy access and air pollution goals can be met. 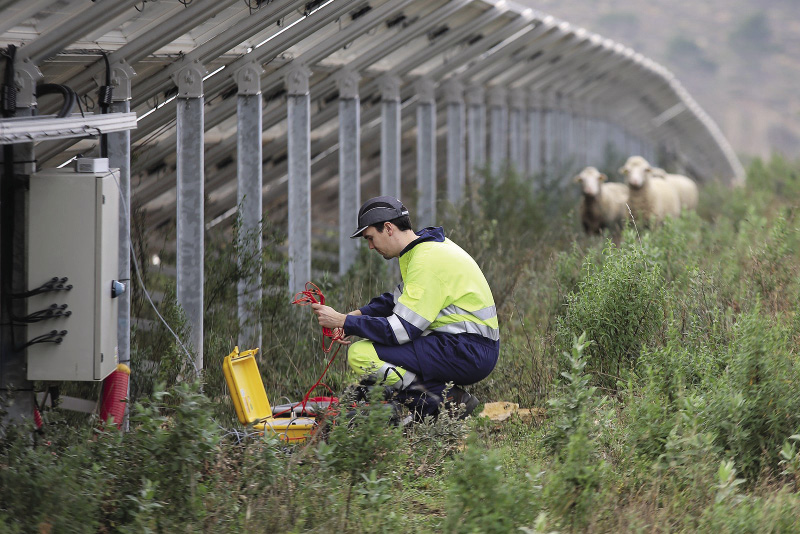 Solar continues to lead the way for renewables and EVs and energy storage are catching up, but much more needs to be done.
Image: Engie


With a 31% rise in generated power last year, solar was again one of the few technologies and sectors keeping pace with long term climate goals, according to the International Energy Agency (IEA). Electric vehicles also remained on track as global sales hit nearly two million in another record-breaking year and energy storage joined the energy transition front runners as new installations doubled, led by Korea, China, the U.S. and Germany.

The findings make for a disheartening read and show only seven technologies and sectors on track with the IEA’s Sustainable Development Scenario. Agreed by 193 countries in 2015, the scenario envisages at least 300 GW of new renewable energy capacity per year up to 2030 to keep the Paris goals within reach.

The tracking report follows an earlier assessment from the IEA which showed energy-related CO2 emissions rose 1.7% in 2018 to an historic high of 33 billion tons. With only 180 GW of renewable energy generation capacity added, the Global Energy & CO2 Status Report showed the amount of newly installed renewable energy capacity was no longer rising after two decades of growth.

Although capacity additions were flat in 2018, solar power generation increased 31% and represented the largest absolute generation growth of all renewable technologies.
With central subsidies cut back in China under Beijing’s 5/31 policy announcement – prompting an 18% fall in new PV capacity; the Trump administration’s Section 201 tariffs taking a bite out of the U.S. market; and India affected by delayed and cancelled tenders, the solar market experienced a slowdown last year.

Solar generation capacity additions had doubled from 2016 to 2017 and despite leveling off, 2018 remained stable and “well on track“ to reach the levels envisioned in the Sustainable Development Scenario, which requires average annual growth of 16% from last year to 2030, the IEA found. 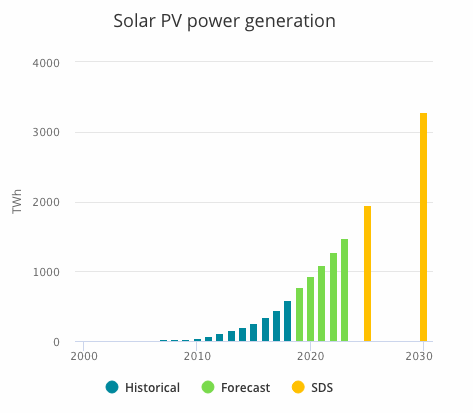 With last year’s increase of 97 GW, solar’s share of global electricity generation exceeded 2% for the first time and PV remains the fourth-largest renewable electricity technology in terms of generation, after hydropower, onshore wind and bioenergy.

Although the IEA is renowned for low-balling solar growth in its forecasts, its latest report stated “robust” PV growth could be expected in the next five years. The key markets will remain unchanged, with China, India, Japan and the U.S. the major players while Latin America, the Middle East and Africa are expected to accelerate because of their improved economic attractiveness and continued policy support. 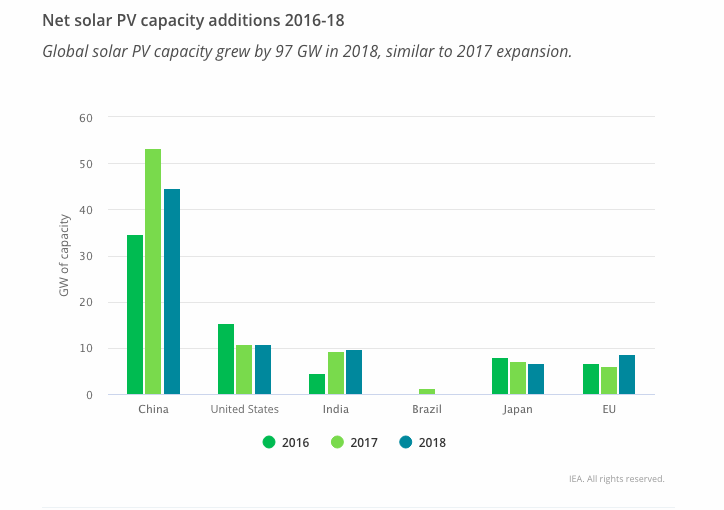 The IEA was also pleased with global EV uptake after another record year for sales – 1.98 million vehicles – raised the total stock to 5.12 million. Sales increased 68% in 2018, more than twice the average year-on-year growth required to meet the Sustainable Development Scenario by 2030, the IEA said. In that scenario, 15% of the global car fleet is electric by 2030, an ambition that requires annual average growth of 30% from 2018 to 2030. 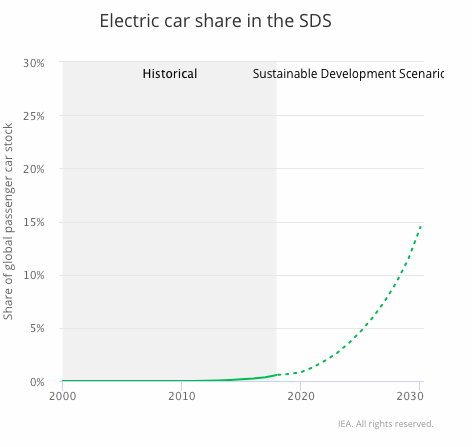 While ambitious policy announcements have played a crucial role in stimulating EV uptake in the past two or three years, however, the penetration of EVs is still limited to less than 1% of the global car fleet.

Norway continued to have the highest market share for EV sales, with 46% last year, followed by Iceland (17%) and Sweden (8%), the IEA found, noting progress in decarbonizing the power sector would accelerate the carbon emission reduction benefits of EVs. 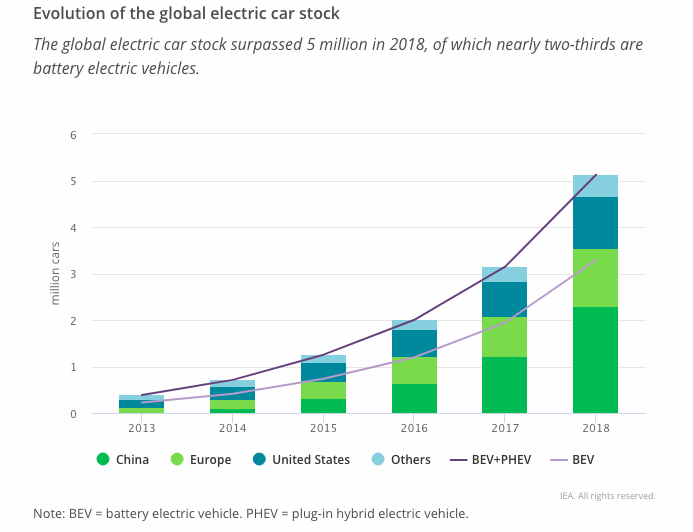 The leading storage market was Korea, which accounted for more than a third of the global capacity installed in 2018, on the back of favorable policy measures. China emerged as the second biggest market, with nearly 500 MW of new battery storage installed and 1 GW in development, followed by the United States and Germany. New markets in Southeast Asia and South Africa also entered the stage, thanks to supportive mechanisms introduced by governments and utilities. 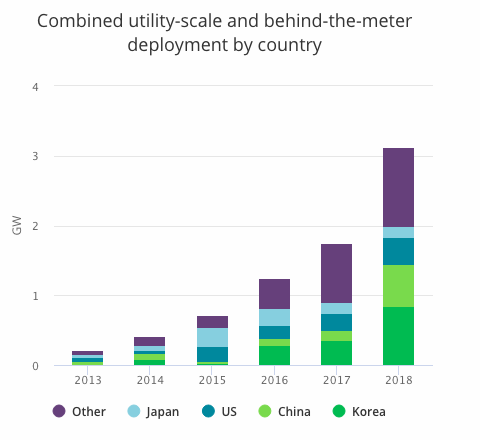 The recent trends are in line with the deployment growth needed to reach the Sustainable Development Scenario level of 200 GW by 2030. However, the IEA underlined installations will need to continue multiplying at the strong 2018 rate for ten years to hit their goal.

The technology mix remained largely unchanged, with lithium-ion batteries accounting for nearly 85% of all new capacity. 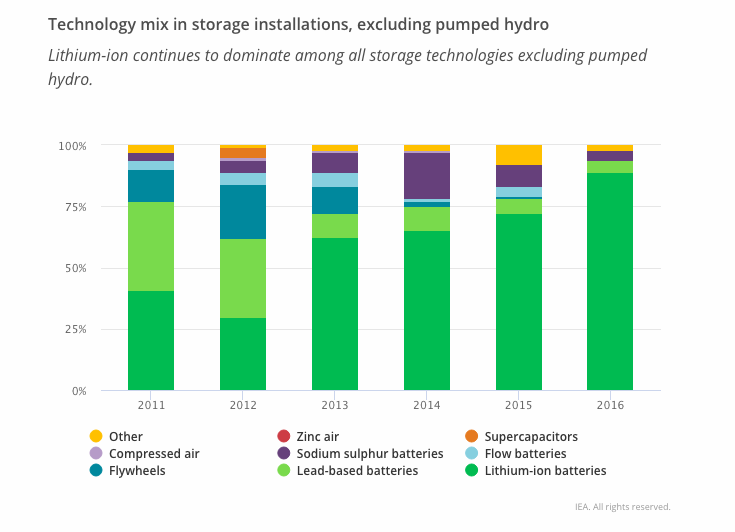