“Ranking List of Photovoltaic Inverter Brand in China 2012″ released at ne21.com on March 1st, 2013. This list is made by www.ne21.com through surveying the previous year’s shipment of photovoltaic inverter enterprises that are large inChina, and weighing the brand history, social image, enterprise scale, product certification, technical research and development, product quality, customer feedback and other factors so as to provide references for the photovoltaic owners, EPC and distributors at home and abroad. This survey will be conducted once a year, the results of which will be posted on ne21.com and PVMate International.

The data indicates that with sales performance over RMB 1 billion, Sungrow Power Supply Co., Ltd stands at the first place in both general ranking and power station photovoltaic inverter list and takes the lead in the industry by a large margin. 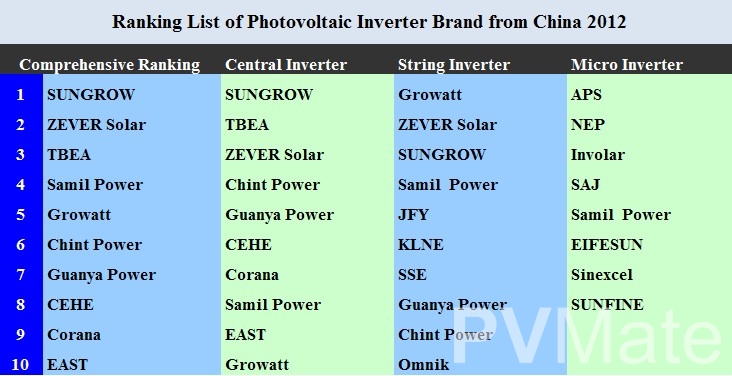 ZEVER SOLAR stands at the second place in the general ranking list. ZOF and ZEVER SOLAR merged in early 2012 and brought in full play respectively their products of power station photovoltaic inverter and string photovoltaic inverter. By the end of 2012, international inverter giant SMA purchased 72.5% of its shares, entered China’s market and will be bound to compete for the market share.

To ensure the fairness of the ranking, we not only surveyed the shipment of 2012 (taking into consideration the typical projects, media coverage, customer’s feedbacks), but also surveyed the brand’s popularity (including brand history, social image, enterprise scale, technical research and development, certifications, product quality and so on), sought opinions from purchasers, and also organized online voting to gain the brand’s popularity.
To ensure the fairness of the data collected in this survey, The online voting results are excluded as it’s unable to objectively reflect the popularity of each brand.we revised the proportions of the above criteria: shipment taking up 60%, brand’spopularity 20%, purchaser’s opinion 20%.

The datas indicates that the top ten enterprises took up over 70% of market shares although many new inverter brands emerged last year. Power station photovoltaic inverter 500KW or more bigger will dominate the domestic market in the next five years, the price of which lowered from RMB 0.7 /W at the first half year to RMB 0.5/W at the end of the second half. Most of the electronic components used in the inverter are imported and are limited to be cheaper; however, the performance of the inverter is not only determined by the hardware, but also closely related to the software. There are over 100 inverter manufactures inChina. How to balance the quality and cost are the pressing problems for the manufactures in the market of stiff competition.